Well we are now back in New Zealand in a spring-time that seems more like mid-winter. The woodburner and the heat pump are running and I'm still feeling the cold.

I've got Colin to post the photo Sally took of me at Land's End. It's quite helpful she took the picture as I forgot to sign the official book at Land's End to say I had finished the walk. Doh! It is a bit sad really as if someone checks the books for statistical purposes it will look as though I started out from John o'Groats but never reached Land's End. There was an official photo taken of me at Land's End but I have yet to see it and with the UK postal system in its current state it may be a while before I do.


Health Issues
By the end of the walk my sore right toe was all but healed and generally I was feeling pretty fit. When I compare the photographs of myself taken just before the walk with those taken just after I clearly look a lot healthier after the walk. My weight dropped from 71.6kg (11st 3lb) measured in Torquay before the walk to 64.6kg (10st 2lb) measured in Penzance after I finished. However after less than 2 weeks holidaying in the UK my weight was back up again to 69.1kg (10st 12lb). My home scales now put me at 69.7kg. I have had no leg or foot problems since the walk ended. The GERD, which I was suffering from before the walk, has disappeared. I stopped needing Gaviscon after about a fortnight of walking and I've not taken Losec now for 3 weeks. I did however have my first ever full blown migraine the evening of the day after the walk finished and I've been troubled with headaches on and off since, but thankfully not with the same intensity.

I had a blood test last Thursday and my lymphocyte count was in the normal range at 3.5x10^9/L and fractionally below what it was when the walk started (3.6x10^9/L). My red cell count was just in the normal range when I started the walk but slightly below the normal range when measured last week. It has been lower in the past. My haemoglobin, at 130g/L, is the lowest it has ever been, having dropped from around 140g/L before the walk. I am hoping this is just a result of the foot impact over 1000 miles of walking and not a CLL related change. It will be interesting to see if it returns to its normal level over the next few weeks/months.


Donations Closed
I went to the Charitygiving website today and locked out any further donations for Cancerwalker. However anyone who wishes to do so can still go to the links provided on this page and donate directly to either the Malaghan Institute or Leukaemia Research should they wish to do so. When I hear back from Charitygiving I will let you know the final amount we raised for the Malaghan Institute and Leukaemia Research plus any monies donated directly to the charities as a result of the walk.


Acknowledgments
Thank you all for your generosity! Many thanks also to those of you who took the time off to come and walk with me. It made my journey much more enjoyable and memorable. Thanks also to those who provided transport or accommodation or provided a laundry service and those who did 'all of the above'. I truly enjoyed your company. Thanks to those of you who came to take me out to dinner and help me relax after a long day walking. Your companionship was much appreciated. Some were old friends, some I hadn't met for almost half a century, whilst others were new friends met through the walk. Thank you one and all.

Finally I must thank those of you working behind the scenes. Many thanks Ron for you support with publicity in the UK and on the ACOR site. Thank you Colin for keeping the blog updates flowing and dealing with communications queries. Thank you Sarah for converting my text messages about donations into actual donations on the Charitygiving website. It just a pity we weren't able to maxout your credit card with the donations! Thanks to Weed for acting as a phone messenger and joining Sally, Kit, Robin to come and cheer me in at Land's End.

Finally thanks to my wife Shiel for taking down my dictated blog entries in New Zealand, typing them up and then e-mailing them for Colin to post. This was needed for the first half of the walk to Newcastle. In Newcastle I got a new phone and was able to blog directly to Colin. Shiel also provided me with transport at the start and end of each day for the last 8 days of the walk in Devon and Cornwall. This meant I could travel a more direct route to Land's End without worrying about finding a campsite at the end of the day. It also meant I had the luxury of B&B accommodation.


Gear
The biggest success in the equipment area has to be my map system. I used double sided A4 sized maps on a scale of 1:50,000 downloaded from a DVD supplied by Quo. I used their maps as quite simply, at only 100 UK pounds, they were much cheaper than everyone elses. I'm still waiting to get a refund for the VAT I paid though. If they read this they might like to note I would be happy for them to pay it directly to the charities I am supporting. On most days I printed the maps to the largest size I could that still allowed me to get the whole day's walk on one double sided page. In city areas like Edinburgh and Wolverhampton however I finished up needing two maps per days walk to be able to resolve all the street detail. This however may just be a problem for older walkers, like myself, who suffer presbyopia. I laminated all the maps and never had any trouble with them on even the wettest days. In fact they made useful waterproof mats when one wanted to sit on a wet park bench. I stored the 'map in use' rolled up under a loop on one of my rucksack straps. However I think they would also roll up quite nicely around a walking pole where they could be held in place by a couple of Terry clips. The laminated maps were quite heavy so I only carried enough for about 22 days at a time. My sister posted the maps, as needed, to the nearest campsite at which I intended to stay. It appears the 'Post Restante' service is no longer available in the UK, or at least that's what I was told. I only lost one of my maps, somewhere near Pitlochry.

When I started the walk I had two pairs of old Scarpa leather boots. I estimate one pair had done about 500 miles, the other 1200miles. I started in the 500 mile pair and used them until I was joined by Shiel who brought with her the older pair. I used them for the last part of the trip. The first pair are badly worn down at the heels but when repaired are probably good for a few hundred miles more. The older pair, which were repaired just before the walk, will probably soon start to leak where the leather flexes most in the region just behind the smallest toe. They are already badly cracked. The older Scarpa boots are fantastic at keeping the feet dry. Water only gets in if it goes in over the top of the boot. I'd like to get another new pair of the boots I used but sadly they've changed the design and I don't like the new ones.

I was a bit dissapointed with the Osprey Aether 85 rucksac. I think some of the problems arose from the fact that I had to buy it via the Internet and I think I may have got a harness one size larger than I should have. I could get the harness to fit very snugly by pulling on the tension straps but I think some of the pulling may have been needed to compensate for the possibly oversized frame. This may explain why the metal frame rods punched through the harness. Two of the lid buckles also broke. I think some of the packs' weakness results from the designers reducing the amount of material used in the buckles etc to keep the weight down.
Posted by Richard at 3:17 PM No comments: 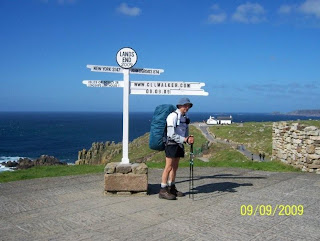 Posted by Richard at 4:19 AM No comments: