Day 14. Llanymynech to The Quarry, Selattyn.

We left the b&b at around 9am and headed for the post office where I got a £20 voucher for my 'orange' blog-o-phone. We were delayed slightly, first by Shiel having water leaking from her pack and secondly by me deciding to polish the toes of my boots. I think the technical term for these procrastinations is;- 'a faff.'

It was sunny but very windy when we eventually left Lanymynech around 9:30am, and started our ascent of Llanymynech Hill. There were good views of interesting rocky outcrops before we finally arrived at the golf course. Whilst rain threatened it held off all day and we never needed our waterproof clothing. The first ascent of the day though, over Llanymynech Hill, was marred by the overpowering smell of slurry borne in on the blustery wind. However, by the time we reached Porth-y-Waen the air had cleared significantly. Then we followed a road walk to Nantmawr, and a climb through woods (Jones's Rough) to the top of Moelydd where we had extensive 360 degree views. There seemed to be a lot of rain on the horizon, especially out west, but we escaped it.

We headed down for lunch in Trefonan, where a dead tree has been skilfully carved in the shape of an eagle. The final climb of the day was up though Racecourse Wood where we met up with Bill and Peter who are walking Offa's Dyke in stages over a number of years. We had passed them earlier in the day in the company of their wives, Jill and Susan, who had now travelled on ahead to pick them up near the car park at the old Oswestry Racecourse.

We had a good chat with them, whilst climbing to Racecourse Common, which made the climb so much less tiring than we had feared. We stopped at a plane table near the racecourse ruins, but all the views are now obscured by new tree growth. Then there was an easy walk to our b&b, The Quarry, near Carreg-y-big. 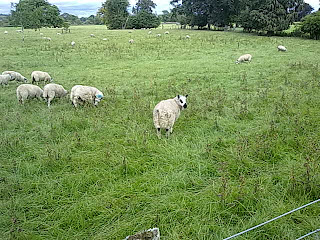